The Thousand Springs area near Hagerman offers some of the most interesting geology in Idaho. The springs that burst out of the canyon walls represent the end of a journey of water that begins in the Craters of the Moon area nearly 100 miles away. Ritter Island is one of the best places to see this geology firsthand.

The “lost rivers” of south central Idaho are known for trout fishing and their importance for area farms and ranches. But as these rivers flow over the extensive lava fields of the Craters of the Moon area, the water sinks into the porous lava and disappears underground.

The water stays underground for perhaps 200 years, until it flows as waterfalls out of the canyon walls of the Middle Snake River. The water is crystal clear and pure, creating beautiful springs and pools.

Due to various demands on water, only a fraction of the springs remain. Minnie Miller Springs across from Ritter Island is one of the largest remaining natural spring complexes in the Thousand Springs area.

These springs have provided the foundation for the Snake River’s trout industry, making the area the largest producer of commercial trout in the world. Many tourists and outdoor recreationists travel to enjoy the springs, which offer excellent fishing, birding, waterfowl hunting and other outdoor recreation. Tour boats, canoeists and kayakers enjoy this stretch of river for its scenic beauty and geologic marvels.

Ritter Island is centrally located to enjoy this area. Its special location has long been recognized, giving the island an interesting history as a dairy farm, private retreat, nature preserve and now a state park for future generations to enjoy.

The recorded history of this area began with the arrival of French trappers in the 1800s. Pioneers began traveling the Oregon Trail in the 1840s, and entrepreneurs settled in the area to provide services, including a ferry that crossed the Snake River at the south end of the property. 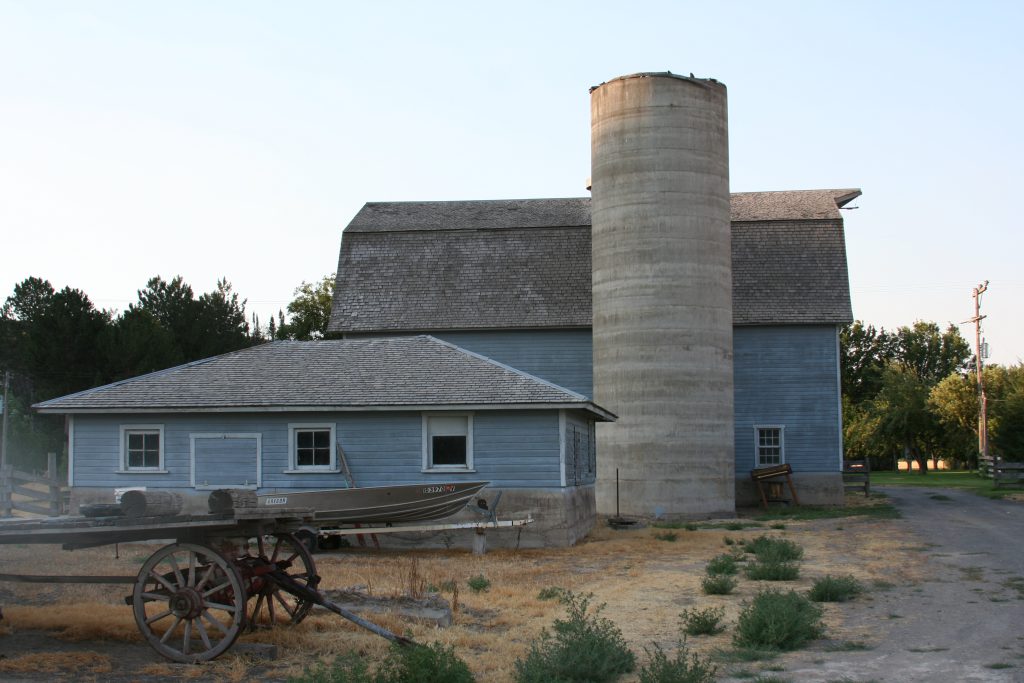 The property was purchased in 1918 by Minnie Miller, a Salt Lake City businesswoman who wanted to make the property a demonstration farm. Miller was a big game hunter, traveler and entrepreneur who appreciated the unique setting of the island and its proximity to the springs.

She set up what was then a state-of-the-art dairy with the intent to breed the world’s finest herd of Guernsey cattle. The house on Ritter Island—known to this day as the Rock House—was built in 1920, as was the barn. The primary purpose of the farm was to produce breeding cattle rather than commercial milk production. Farm workers were able to take the cream produced on the farm home with them in the evenings.

Miller welcomed visitors the island, and many people remember her practicing judging on the Guernseys, coming to her July ice cream socials and enjoying the beauty of the farm.

The Minnie Miller Farm became known for the finest Guernseys in the world, just as Miller wished. These cattle were featured in agricultural and popular magazines around the country during the time.

The farm featured a milking parlor in the barn, which can still be visited on the island.

In 1954, the farm was sold to Federal Judge Willis W. Ritter, who used the island as a private hunting and fishing retreat. The Ritter family owned the island for 32 years.

In 1986, The Nature Conservancy purchased the property. Ritter did not allow public usage, but many local people thought the future of the property should allow access to the island and canyon.

The Nature Conservancy, a non-profit conservation organization that protects special places around the world for people and nature, recognized the importance of the property for its unique ecology and the importance to the local community. The Conservancy had been working in Idaho since 1976, when it purchased Silver Creek Preserve, which was well known as a world-class fly-fishing destination.

The Conservancy believed that protecting the springs of the area was important for the Middle Snake River’s clean water and wildlife habitat. The springs supported a number of invertebrate and fish species, including the Shoshone sculpin, a fish found nowhere else on Earth.

The Conservancy purchased the 385 acres, including Ritter Island, two miles of riverfront, and many springs and spring creeks along the canyon.

The preserve remains a real haven for wildlife. Waterfowl use the wetland habitat, especially in the spring and fall. Herons nest on the island, and raptors like golden eagles and prairie falcons nest along the canyon walls. During annual Christmas bird counts, Ritter Island often has one of the highest counts of bird species in the state.

The island includes the home and the historic barn, both still in excellent condition. Visitors can tour the dairy facilities installed by Minnie Miller as well as many of the historic farm implements and tools. Walking trails wind through the island, including one that offers an excellent view of Minnie Miller Falls.

Each September, Ritter Island has been the location of the popular Thousand Springs Festival. The festival includes artists from around the region, regional food specialties, music, children’s activities, natural history displays, and wagon rides. Originally started as a fundraiser for the Nature Conservancy, for the past several years, the festival has also benefitted the Magic Valley Arts Council.

The Nature Conservancy was also instrumental in the purchase of Box Canyon and Billingsley Creek, two other important units of Thousand Springs State Park.